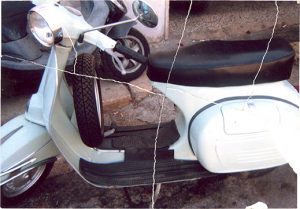 I am pleased to announce that my thirty-year project Bilder von der Straße (Pictures from the Street) was completed recently. I decided to discontinue the work after one thousand findings. The project began in August 1982 and ended in March 2012. During this time I picked up one thousand lost or abandoned photographs from the world’s pavements. The complete work is now available in book form.
Although the collection has been exhibited widely, this is the first time it is printed as a complete set. Published in four volumes, the books present every found photograph or its fragments in their original size and in the chronological order they were discovered. No intervention has taken place except for the inclusion of the date and location where each picture was found. As well as providing a record of my travels, the books document people’s use and abuse of photographs, with almost all the photographs in the collection depicting people and more than half of these being ripped or defaced in some way.