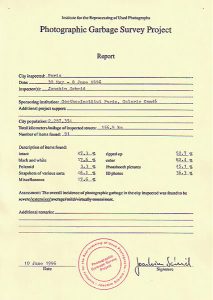 For nearly fifteen years I’ve been collecting all photographs I’m finding in the street. Each photograph becomes part of the ongoing project Pictures from the Street. In the beginning, collecting this garbage was a casual activity, however, it slowly turned into an obsession. The longer I’ve been doing it and the more photographs I’ve been finding the more my way of perception changed. Now I don’t find photographs any more, I look for them – just like a truffle pig. Indeed I think that the nearly 400 photographs I have found so far are a treasure. Some of them are extremely fascinating images (mankind would have lost them irretrievably without my intervention) and the entire group forms a unique compendium of photographic garbage, an anti-museum. While museums collect and preserve those pictures which according to our society’s consensus are important samples of our present culture and should be kept for the future, I’m specialising in those images which obviously are considered so unsuitable and irritating that their makers and owners think they should not have any future at all. These images represent the other half of our culture.
In 1996 I started the Photographic Garbage Survey Project in order to collect and preserve thrown away photographs systematically. I travel to selected cities all over the world and stay there for some days or weeks. Every day I go for an erratic walk through another part of the city in order to collect all abandoned photographs. The result of these inspection tours is a report for each city consisting of the found photographs, a list of discovery sites, maps with the inspected streets marked, and a statistical evaluation. Altogether these reports form an international compendium of photographic pollution in modern cities. The project started in Vigo (May 1996). Subsequent cities include Paris (June 1996), Berlin (August 1996), Zurich (September 1996), São Paulo (November 1996), San Francisco (February 1997), and Rotterdam (July 1997).
JS, Berlin, August 1996
(Statement for the catalogue of the VII Fotobienal, Vigo 1996)