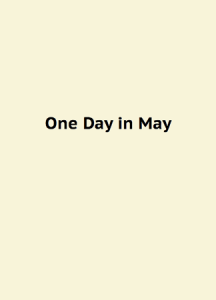 Every time we learn about another gun rampage in the US, people ask the same questions – why did someone kill so many people, what went wrong with that person? In May, 2014 another one of these killing sprees occurred in Santa Barbara, California, claiming seven lives. One Day in May does not ask any of the usual questions but takes a look at the wider context of the event – the other fourty-nine shootings that happened on the same day, starting in Connecticut and ending in California in the course of the day. The Santa Barbara shooting is only one event in an ongoing series; it made international news because of the number of victims. Looking at the local news on any given day may tell us more about the occasional mass shooting than asking the same questions time and again.
2014
digital print, colour
14.8 x 10.5 cm, 124 pages
softcover, sewn
100 copies
32 € (last copies)