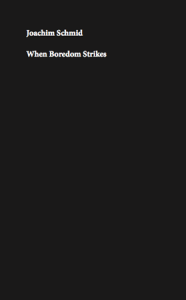 The internet is flooded with billions of snapshots, many of which are hosted on photo sharing websites like Flickr. With millions more added every day, we often wonder why people decide to take these pictures, why they save them, why they put them on public display. Studying the captions and descriptions of these photographs we see a variety of reasons for their existence. One of them is simple, striking and apparently quite popular: boredom. There is an incredible number of photographs on Fickr that people have taken just because they’ve been bored.  The book assembles 156 photographs made on account of boredom. Each picture is accompanied by the photographer’s original caption. In stark contrast to the title this book isn’t boring at all, but very revealing and often hilarious.
2012 (the 2009 Blurb edition is discontinued)
print on demand, b/w
17.5 x 11 cm, 160 pages
softcover, perfect bound
open edition
12 €