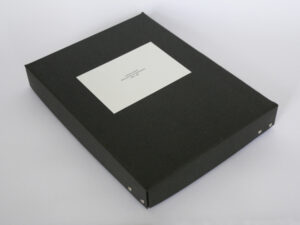 The photographic project Menschen des 20. Jahrhunderts (People of the Twentieth Century) began as an experiment to see if there was any logic behind which newsworthy photographs make it to the front covers of newspapers, and how this may correspond with the diversity of photographs of the respective event. Created between August 1985 and March 1987, the final collection consists of fifteen booklets, each containing repetitive images of a particular person that, for some reason or another has made it onto the front covers of German newspapers.
The criterion for selecting the images was rigid; the photographs were only to be taken from a pre-chosen list of twenty German newspapers that were available in West-Berlin at the time; at least 50% of those newspapers had to feature the same person on their front cover for images to be selected.
Each newspaper has its own particular page in each booklet of compiled photographs. If one of the chosen newspapers did not publish an image of the respective person on its front cover, its respective page in the booklet is left blank.
The resulting booklets contain images that have been removed from their original context and presented without their relevant news stories. All photographs are (re-)printed in original size. Although some persons depicted are well-known, it is still the title of each book that gives the images some grounding. These include: The Civil Servant, The Physicist, The Artist, The Astronaut, The Goal Keeper, The Tennis Player, The Professor, The Princess, The Terrorist, The Actor, The Diplomat, The Writer, The Dissident, The Chancellor, and The Party Leader.
2013
digital print, colour
16 booklets, 29.7 x 21 cm, 24 pages each
softcover in box (32 x 24 x 4 cm)
25 copies