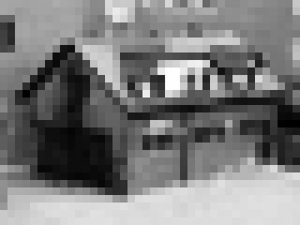 I have been living with Marshall McLuhan’s books for more than thirty years, so when I was in Toronto, in the spring of 2010, a visit to McLuhan’s institute was inevitable. McLuhan was the man who anticipated the internet four decades in advance of its inception, the man “who perpetually stated his loathing and contempt for most of the electronic age, yet a man who perversely and ironically is considered its biggest cheerleader” (Douglas Coupland). Mulling over the impact of McLuhan’s writing as well as the impact of the internet on the perception of his ideas, I decided to test the internet and specifically the search engine, that mnemonic slot machine that the modern world relies upon, using McLuhan as an example. The Coach House, McLuhan’s professional home, a tiny building behind a grand old mansion on the university’s campus, served as my object of investigation. On the anniversary of McLuhan’s death, December 31st, 2010 a Google image search for “Coach House” Toronto produced “about 12,100 results.” The search engine presented a selection of 908 “relevant” photographs. All are now printed in The Coach House / An Inventory. Five of these images relate in some way to the coach house in question; two of them show the house itself and a further two show Marshall McLuhan at this coach house.

The Coach House book is a collaboration of Joachim Schmid and NPN Drukkers. The book was produced on the occasion of the exhibition Graphic Detour at the Graphic Design Museum Breda (opening in June).