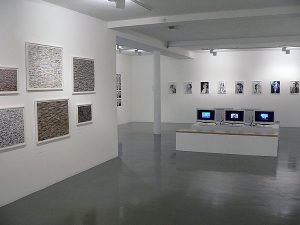 “For the last 25 years Joachim Schmid (b. 1955) has challenged the traditional and prevailing idea of ‘art photography‘. Instead, he has championed the importance of photographs that are produced and seen everyday; ranging from passport photos, to high street studio portraits, ID cards and, more recently, the Internet.
In Bilder von der Strasse (Pictures from the Street, ongoing since 1982) Schmid has collected discarded photographs from around the world, revealing the bizarre in the ordinary and overlooked. The exhibition also includes Photogenetic Drafts (1991). Using negatives a studio photographer had cut in half to prevent their further use, Schmid has created ironic and unsettling photo-collages that play on the predictability of the commercial studio portrait. The exhibition will premier two multi-channel digital photo installations, Tausend Himmel (Thousand Skies, 2005) and Menschen und Dinge (People and Things, 2006).
Schmid‘s interest in collecting and archiving photographs reflects a concern with photography as an all-encompassing discourse that runs throughout the public and private spheres of our lives.
The exhibition has been organized in collaboration with the Tang Museum at Skidmore College (Saratoga Springs, New York).
Two publications have been produced to coincide with the exhibition and are available from the Gallery Bookshop. Tausend Himmel, published by The Photographers‘ Gallery, is a full colour 64-page artist booklet featuring images from the project of the same title; and a monograph, Joachim Schmid Photoworks 1982—2007, published by Photoworks (UK), Tang Museum (USA) and Steidl (Germany), with support from The Photographers‘ Gallery and the Andy Warhol Foundation for the Visual Arts.”