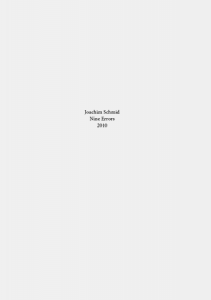 The series Nine Errors was made when Breda Photo Festival invited me to participate in their exhibition Another Street View in September 2010. Photographs were presented as an online exhibition that was accessible via smartphone. Stickers with QR codes refering to the exhibits were spread around the city of Breda. So the exhibition existed only on the displays of smartphones in the streets of Breda. Instead of providing the expected images for an exhibition in public space that would be accessible exclusively for the owners of smartphones and that would support the idea of turning public space into a machine-readable surface, I decided to subvert the system by introducing (images of) a series of errors. Throughout the following years, stickers with the very same codes were pasted in various cities, replacing existing codes with error messages.
2014 (the 2013 print-on-demand edition is discontinued)
digital print, b/w
21 x 14.8 cm, 24 pages
softcover, saddle-stitched
50 copies

One Reply to “Nine Errors”